The human-nature relationship has become central to the contemporary ecological discourse. The boundaries of what is ‘human’ and what is ‘nature’ are also in question. The long isolation of nature from the social contract has led to unhealthy lives, and technocentric ravaged landscapes. The histories of separations and of treating the “planet as capital” has culminated in new emergent emergencies, as Covid -19, climate change, sixth extinction, air pollution, which only help accentuate the ever-present interdependencies. Post these crises, the human species may biologically survive, but its emergent psychological and physical embodiments may leave it transformed into another ‘being.’ It is in the interstices of possible potential futures of the human condition that Sharbendu De locates his practice in.

The ‘Solastalgia’ these current works allude to – “the homesickness you have when you are still at home,” is not a state of faraway places, distant times or sci-fi alienations- it is present in almost immediate and relatable spaces, as environmental conditions deteriorate. They act to jolt one out of complacent denials. The dystopian landscapes depict impending times when “oxygen has entered the commerce of human relationships.” The dark, dreamlike photographs are set in domestic spaces, where lone individuals struggle for their survival, refraining from human company, to avoid sharing the scarcest resource of all– clean air. They seemingly narcissistically pleasure themselves, accompanied by metaphoric objects and domesticated animals – rabbits, ducks and pigeons (with a disclaimer that none were hurt), as if seeking solace in multi-species relationships. Are these ontologies of new humans, made of loss, estrangement, and despair?

Such a meticulous and engaged artistic endeavor underpins an in-depth consideration for the state of the environment. The multitude of literary references it holds, reflects an engagement with the vast growing contemporary literature on the ecological condition. The artist’s pursuits as a researcher as well as professor of lens-based media is also evident. He has taken us on other important journeys of imagination earlier as well. The set of staged photographic series Imagined Homeland had led us to the borders of Northeast India. The images were an outcome of seven years of interaction and collaboration with the local forest community to co-imagine the futures they want for themselves.

Constructed or staged photographs have a long and illustrious tradition starting from the early seventies. Releasing the photograph from its ‘documentary’ moorings they became documents of an artist’s deeper enquires. The photographer as imaginer, also became a storyboard creator, set designer, and director. Here, each image is pre-imagined, carefully setup, with props, lighting, models, in pre-determined locations, as in a film-set. They invite a reflection into the artist’s intent, motivations, and imagination. The images unravel time, not as linear narratives, but as complex cyclic resurgent visualities which keeps appearing and re-appearing long after one’s physical encounter with them.

Today, all global is local. The immediate is everywhere. These images can be from everyplace, anywhere. They are not directly political but testimonies of lived human conditions, yet they hold the politics of the moment in their layered presence. As the global and local intermesh, the indeterminable flows between the past and the present, the here and elsewhere – all markers of the Anthropocene, an era where many previous planetary boundaries are being broken by human agency and what we know is unsettling and uncertain. Like air, this moment diffuses and circulates, in an ether of past-present and futures, merging them into a continuum which challenges all simple causality and linearity. Airborne pollutants are not just particles, but are centuries of mined earth, excavated by millions of human desires in desperate pursuits of an elusive happiness. They reflect the broken promise of a techno-capitalistic trajectory. A young Marx had written about the body of the fish becoming alienated from its extended body – water, when it is polluted by industry. This body of work is a reminder that we need to reconfigure and repair our estranged relationships with nature if we are to have any hope for our futures. It may be the Zen of life.
– Text by Ravi Agarwal

Acknowledgments: An Elegy for Ecology is made possible through generous supports from PhotoSouthAsia, an initiative of the MurthyNAYAK Foundation and KHOJ International Artists’ Association under their project titled ‘Does the Blue Sky Lie? Testimonies of Air’s Toxicities’. Several artworks were produced as part of a commission by the National Taiwan Museum of Fine Arts, Taiwan. 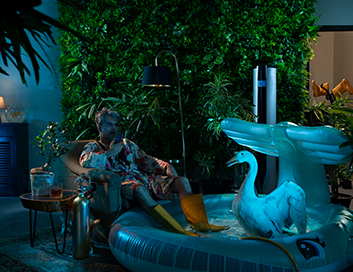 Art India | Under the Weather | By Meera Menezes