The city, however, does not tell its past, but contains it like the lines of a hand, written in corners of the streets, the gratings of the windows, the banisters of the steps, the antennae of the lightning rods, the poles of the flags, every segment marked in turn with scratches, indentations, scrolls.

In 1890, Sir Samuel Swinton Jacob published the Jeypore Portfolio. Under his direction, artists drafted neat sketches, dismantling (on paper) large and complex buildings into neat categories like doors, windows, brackets, inlay work, etc. The Jeypore Portfolio told a fragmented story of the built heritage of the Indian subcontinent, just as Marco Polo described the city of Zaira, the present and the past, in the quote above. Shruti Mahajan finds stories in wood and in stitch, and retells them in her new series, Between Brackets.

A parenthesis creates space for an interlude or an explanation, it is independent yet attached to the sentence. In architecture, a bracket supports an overhanging ledge extending space of a building. In language, as well as in construction, brackets buttress development of a structure and ideas. Shruti explores the functions and form of the device. There are brackets stacked together supporting themselves as well as beams and ceilings. She replicates, draws and paints, makes marks and collages to create a series of work in a range of media, and techniques. In Between Brackets memories and messages flow out of open envelopes, libraries are evoked and patterns woven. Plans are drafted of spaces that cannot be contained, but those that grow— perhaps out of past experiences, projects and preoccupations. 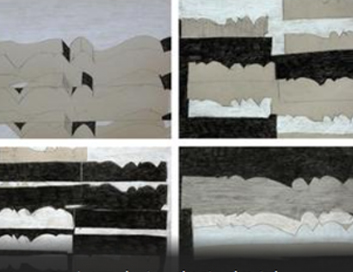 The Hindu: Artist Shruti Mahajan’s Abstractions on Home, Spaces and the City | By Sangeetha Devi Gundoo