This exhibition is a continuation of Shrine Empire’s efforts to create dedicated exhibitions that allow viewers to delve into the depths of artistic practices and the conceptual processes that they involve. In this dialogue between the distinct bodies of works by Katyayini Gargi and Divya Singh emerge various physical and psychological states of transience. While Gargi dismantles physical structures that embody psycho-social structures of stability, Singh is interested in the objects that lie within these structures and the various, unstable portals of memories and visions that they open up. Together, these bodies of work shake the ground below notions of the sense of security that a home embodies in popular imagination and familial structures as essentially fragile, and permeable to time.

Katyayini Gargi (b. 1990) graduated with a Bachelors in Painting from M.S.U., Baroda followed by a Masters in Fine Art from Central Saint Martins, London. She works with multiple mediums including painting, sculpture, animation and music/sound. She lives and works in Delhi.

The Centre does not hold is borrowed from W.B. Yeats’s widely read poem, The Second Coming. Yeats began writing this in January 1919, in the wake of the First World War, the Russian Revolution, and political turmoil in his native Ireland. Yet, the poem captures more than just political unrest and violence. Its anxiety concerns the social ills of modernity: the rupture of traditional family and societal structures; the loss of collective religious faith, and with it, the collective sense of purpose; the feeling that the old rules no longer apply and there’s nothing to replace them.

Katyayini Gargi appropriates this term to describe the personal, to interrogate one’s relationship to a sense of stability. As we open up to the world around us and come out of our proverbial shells, we are left with a sense that all social, political, environmental and familial structures that we often take for granted lie on shifting, precarious grounds. Furthermore, these pillars of so-called stability can also become an impediment, should we try to surpass them. The artist regards the chaos that this unleashes to be ultimately cyclical, as she too occupies a transitory space currently; just as Yeats’s words held relevance to Joan Didion in the 1960s as she wrote, “the center will not hold” in Slouching Towards Bethlehem, while describing a social disaster. Con(Temporary Living), Daawat (table for 9) and Carried a House consider the same premise while also contemplating longing. The expectations that revolve around objects: as one moves from place to place, a light-weight, waterproof tent, or that placed upon the lonesome table, with the ability to feed nine comfortably, now lying unused and dysfunctional. Carried a House is more personal as it unpacks the expectations often placed upon women be homemakers, in maintaining some sense of stability as the world shifts beneath their feet.

Divya Singh is a visual artist. Her practice is primarily rooted in painting and explores themes such as isolation, experience, and memory—emanating largely from a poetic engagement with time. Mediums such as photography, writing, cinema and painting are at the centre of her language as a practitioner and have featured as important categories of both work and interest. These varied elements come together within the work and can be seen most distinctly in the artist books made by her, as well as found imagery, which accompany the paintings and other media. She is currently working with instant film/polaroid, paintings and text.

“…And just as one clamours to remember a dream and to fix it steady, this memory – it all slinks away for it has already evaporated, and I am back in my room, with all the furniture of life.”

Within this body of work, Divya Singh expresses the inability to pin down sight/vision, the nature of reality, consciousness and time. The works included in this exhibition can be viewed as styptic in nature to fragility and mortality. Even as they are from different moments in her life, what remains contingent within all these works is that they are a reflection of everything that is in-between memory, silence, home, death and exile. The theory of Extramission proposed by the ancient Greeks and Egyptians held that what we see around us is projected out of our own eyes onto the world, and not the other way around. This idea that the world isn’t a given that is chronicled by our perception but that we shape it through our own thoughts and consciousness, acquires ocular relevance in Singh’s practice as she contemplates reality and mortality, taking nothing, not even quotidian bits of our homes and our lives for granted. Singh navigates the transitory void that lies between the world and the ways by which it gets formed in our eyes; a space where the corporeal and visceral nature of lived experience gets washed over, fallible when they register in our memories as a ghost of what was.

EXHIBITION IN PARTNERSHIP WITH SAFFRONART CLICK HERE TO VIEW 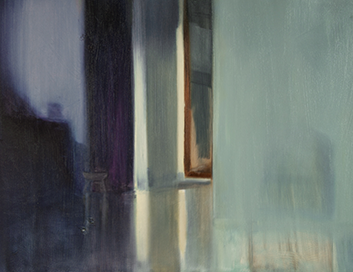 Mojarto | A Lament Of Temporal Realities BY Priyanka Bhattacharjee