Suchitra Gahlot’s work is underscored by feelings and dilemmas that make us human. Her installations are emotional apparatuses that use mixed material to ponder over personal narratives that deal with the complexities of contemporary life. Suchitra Gahlot’s work reflects her interest in human behaviour and relationships. As an artist, she is interested in exploring all that binds us and yet makes us different people. Her early work drew heavily from group dynamics and crowd-sourcing to evoke the universal themes we all feel differently. Her installations are an assortment of ‘nothing new’ presented in a surprising manner. Nondescript objects like jars, fabric, boxes, items of nostalgia are painstakingly remodeled and presented with some flamboyance. Her installations enjoy a chemistry with text with the titles of her work magnifying the emotionally fragile pieces they represent. 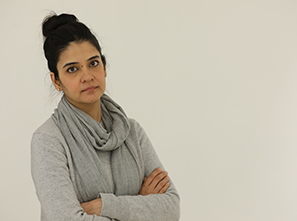