“I remember trying desperately to make pretty paintings to sell as I needed the money. But they just wouldn`t come. Then I made a painting `Terrorist on a Floating Land,` and began a two-year long series on Kashmir.”

An artist like Veer Munshi is one of the few painters in India today who is able to transform his experiences as an exiled refugee into the language of painting. Munshi was born and brought up in the Kashmir valley, but was forced to move to Delhi in 1990 when it was no longer safe for him to stay there.

For Munshi, viewing pleasure plays no role in his objective as an artist. His work is very personal and at most times disturbing. It is his reaction to a specific event – in this case, the ongoing political situation in his home, Kashmir – and he wants everyone who views his work to understand what is happening there. Rather than leaving viewers with a light hearted happy feeling, Munshi wants his works to cause reflection and spread awareness. He is a painter with a clearly defined course In Veer Munshi`s paintings we see a reflection of the anguish and fear he felt whilst living in his own home, a fear that plagued so many other Kashmiris as well. Munshi was forced to give up his home and heritage, and witness how men he once knew turned into vicious, killing animals – a theme often recurring in his large canvases.

In Munshi`s paintings we also see the artist`s bitterness upon seeing a once beautiful valley ravaged by men intent on nothing but their own gain in the name of patriotism. This farce is reflected in Munshi`s ability to telescope images of pain and hatred over those of the Kashmir that was. Beautiful houseboats lie overturned and neglected in the Dal Lake and the flowers in the Shalimar Garden are trampled and dying. The artist also manages to manipulate the colour he uses to suit the message of his paintings. Reds, oranges and greens, otherwise warm and inviting, are given harsh and dark roles. His purples are potent and the shades of brown always cloak and muddy everything.

His figures however seem to mirror a different emotion. One of giving up. Their eyes are often hollow or blank and they bend and bow subserviently to captors like vultures that prey over them. One figure that occurs quite often in his work is that of the puppet master. A person who pulls the strings and controls all the others, manipulating the future of the valley. He stands in demolished doorways and the remains of arches, observing the havoc he has played. Fascinatingly, the figure of the puppet master resembles that of Munshi himself.

Today, eleven years later, the immediacy has disappeared from Munshi`s work. The problem, rather than fading away, has intensified and the artist has moved from a loud activism to a quiet acceptance and deeper understanding of the fate of his homeland. He says, “Today I view Kashmir alternatively – as a nostalgic memory and as a problem.”

This was reflected in the installation Munshi put up in 2001 – an upturned market boat, the symbol of Kashmiri living, was transformed into a coffin, and ten pictures of the artist on its sides were labeled secessionist, refugee, displaced, fundamentalist and other things Kashmiris were called.

Munshi`s canvases present images that are intriguing. They cross average notions of reality and pass into a surreal realm. He works in oils and sometimes sketches in charcoal. In 1999 he led the team of designers of the Jammu and Kashmir tableau that won the first prize in the annual republic day parade. 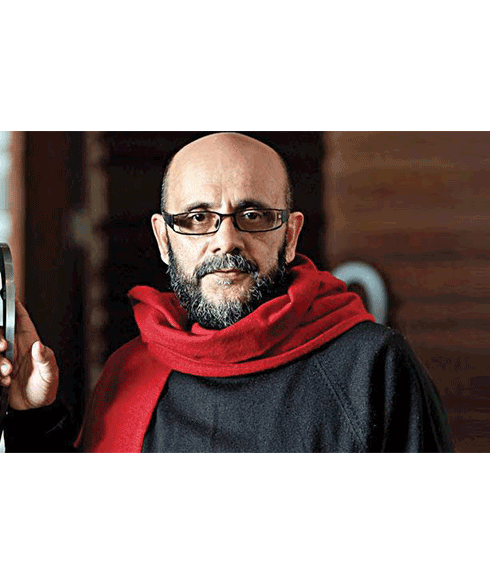