Shrine Empire is excited to present a solo exhibition of the artist Ayesha Singh. The exhibition, ‘It was never concrete’ presents new works made by the artist in response to the city of Delhi, where the artist currently lives and works. The series of works on view explore how the specific social, political and historical context of the city manifests in its architecture. Singh’s works reveal the power structures embedded in the cityscape, and the aspirations and destiny that they embody.

“The shape-shifting force of history assembles and reassembles itself. And built architecture is perhaps an ostensible symptom of its ebb and flow, aggression and benevolence, knowledge and folly. In Delhi, an ancient city that has seen the rise and fall of empires, regimes that ran on megalomania and machismo have been malleable to similar narratives that have replaced it. Structures that emanate grandeur are not static, but destined for occupation, disuse and regeneration. Their domes and columns collide and adhere; embellishments drop into the abyss of verandahs that have lost their footing; stairways that dreamed of the stars become enveloped by the refuse of industrial dreams; institutions emerge to crumble. Ayesha Singh explores the fragility of “ornaments of authority *”, their transience, impermanence and inevitable shifts in the meanings that they embody.

The architecture of our collective unconscious is stronger for its composite fragments, its hybridity. Global flows of trade, population, wisdom, and aesthetics informed sensibilities even prior to what we identify as the era of globalization. These diverse influences keep inscribing new affinities upon the city’s framework, as do discourse and lived life. This amorphous continuity and the ways that it subliminally orders our cultural complex are mirrored in Singh’s psychogeographies of the city’s skyline. They escape the essentialization of history and politics that we witness in media-driven, populist narratives and inscribe the varied guises of power in the same tenor.

In ‘It was Never Concrete’, the city’s architecture emerges as a metaphor to critique lofty desires for enduring power and privilege. Singh reminds us that reinforced concrete is far from ‘concrete’, vulnerable to time. Just as the promise of late capitalism, and hype economies that rely on cyber infrastructure with its algorithmic contingency mimicking the logic of material imprints of power. While pirated architecture attempts to hijack the visible and invisible ordering of another’s power, we appropriate towards similar ends — often without form or function — for our homes, public infrastructure, social media accounts and advertising imagery, unconsciously informed perhaps only by the hegemonic ideologies past and present.
Everything shall become fragments that integrate into our present. Time is an agent that allows both permanence and impermanence in Singh’s collapse of history and contemporary into one moment. It is our ally, and our conscience.” 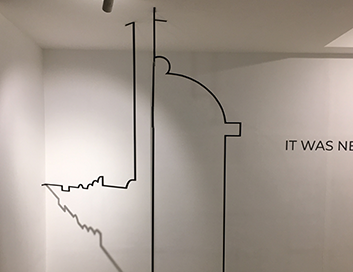