“The processes of memory are random. Quite literally tangled. Neuroscience has sifted through pathways in the brain linked to memory to find that they are all over the place; an absurd process of cataloguing unrelated objects in a hoarder’s den. Phenomenologically, a strong sensorial cue emanating from an individual’s environment could unleash a flood of unrelated memories. Empirical data and the archaeologies of cognitive science are yet to unveil a teleological narrative; the twists and turns of fate. The overarching imprints that we are left to work with are fluorescent patches assembled in the shape of a brain, dispersed tangles of calcium pathways in mice brain, low resolution MRI scans and Positron Emission Tomography. Memory is yet to yield anatomical diagrams in biology textbooks, unlike other mystical phenomena such as the heart that pumps blood. Epigenetics tells us that we could also inherit history in our genetic material, like a newly appointed curator inheriting a museum’s collection, a palimpsest of time. Nevertheless, ultimately a ‘tangible’ memory is entirely its external referent — its material correlates and learned linguistic associations — mnemonics that tautologically loop into the sensorium to reinforce neural pathways. Like a totem, we embalm and contain in the physical shape of a perfume bottle, a memory related to its fragrance. Then there is the totem we inherit from our ancestors, perhaps as a relic, a funerary rite, a fetishized object in the guise of a family heirloom or fear of persecution coded into our DNA. The closest visual/tactile/sensory map we have of historical memory is the museum and of personal memory, a cabinet of curiosities. This exhibition consists of a series of artworks that lend memories their object-hood, saving them from the lapses in our collective and personal memory.” 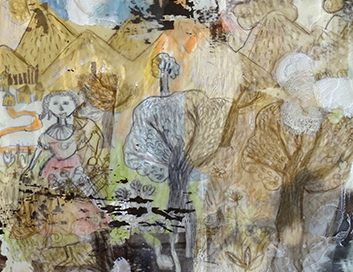 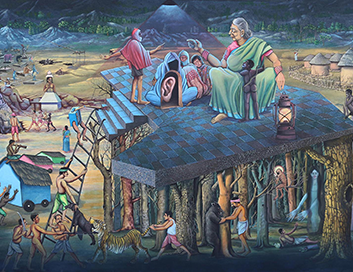