A Time for Farewells – Program Schedule

A Time for Farewells*

Only our most distant descendants will be able to decide whether we should be praised or reproached for first working out our philosophy before working out our revolution.
Heinrich Heine, On the History of Religion and Philosophy in Germany

The owl of Minerva spreads its wings only with the falling of the dusk.
G.W.F. Hegel, Philosophy of Right

The time for farewells has finally arrived. This exhibition is part of my larger engagement with the notion of contemporaneity and its various ramifications. Our contemporary times is characterized by political turbulence, which has stripped away any possibilities of hope, justice, and asylum. Because unprecedented economic, political and social turbulence has resulted in a climate rife with insecurity and precarity, authors such as Brecht, and later Hal Foster have termed the situation as “bad new days”. The seismic changes in the everyday life forces us to look to the future with apprehension. Utopia seems more necessary than ever. How will we characterize the age we live in, based on the dominant emotions of pain and suffering that people experience? Has the time come to move ahead and forge a better future? What ideals would we hold on to, and what all would we abandon in this quest towards the future? Is philosophy, and art ready to imagine the beginnings of that better society?

In 1800 the German intellectuals, might have looked across the Rhine river, and meditated on the chaos and violence of the French Revolution, they might have even congratulated each other for foreseeing such a carnage. However, they believed that they did not need a similar revolution, as they had already gone through the radical Protestant Reformation, experiencing it at the spiritual level, while its practical manifestation unfolded in the form of the French Revolution. Through this act, they claimed the legacy of the radicalism of French Revolution. The philosopher Rebecca Comay observes that Germany was thus able to “position itself as the French revolution’s predecessor, successor, and most faithful contemporary.” Years later, Karl Marx would denounce this pompous, yet futile attitude of projecting German realities onto world events as “German misery.” He writes, “We are the philosophical contemporaries of the modern age without being its historical contemporaries.” While France reaped the benefits of modernity and democracy, during the same period, the German society lagged behind under the weight of the same feudal system which its intellectuals had consigned to the backwaters of history. This example encapsulates the general tenor of the German modernity, its ‘failure of actuality and action’. The potentials that Germany had during that period unveils itself as a series of missed opportunities. Before Germany could even realise, the future had already gone. Walter Benjamin famously identified this as the “hope in the past”, while Derrida characterized it as the ‘‘impossible mourning’’, a loss which it had never experienced.

To imagine the future is also to take the responsibility of actual. The specific emotional mood of our time is the sense of crisis and fear, a presupposition of an upcoming cataclysm. It is the vision of the end of civilization in an apocalyptic climate. The lingering fear of our inner demons and external enemies is active more than ever. How do we overcome this? There is suspicion in the air, it stems from the realities of violence and doom. Such a situation can be averted by collectively imagining a tomorrow which is radically different from the present. This exhibition is an attempt to foster a vision for the future. To seize upon the possibilities, instead of mourning the hope, lost in the past and to actualize it. Hegel has brilliantly summarized our inability to understand the potentials of historic moments in the present through the allegory of the owl of Minerva which will only fly at dusk. According to him we only comprehend the meaning of a historical condition after it passes away. We remain to take stock of the missed opportunities after each epoch. The task today is to be both politically and philosophically revolutionary. Such a task also comes with negations, actively working on the present by rejecting the oppressive structures and institutions of the past. To achieve that we have to say farewells.

There has to be diverse ways of imagining the future. This exhibition seeks to celebrate the multiplicity of our possible futures. I, therefore invite artists to conceptualise a role for the arts as an agent of change. Through art can we foresee what is to come? Would we be able to speculate and conceptualise the arrival of that hopeful tomorrow? How would we anticipate this possibility? How does one see this arrival? Would we be able to visualize a future which is inclusive and just in nature?

To see what is coming is to anticipate, expect, wait, but also to prepare a blueprint for its achievement. To unravel the wonder of the new now, so that we do not miss the opportunity and lament in the future. The time is for farewells too. To say goodbye to the old rigidities, to limitations of imaginations, to constraints of institutions and structures. Therefore, this exhibition to collectively lay the foundations for a new art and new art world which can foresee and actualize the possibilities available to us for a better future.

*“A Time for Farewells” is the title of the preface written by Jacques Derrida for Catherine Malabou’s critically acclaimed The Future of Hegel: Plasticity, Temporality and Dialectic published in 2004. Derrida’s essay unpacks Malabou’s meticulous study on the important philosophical concepts used by Hegel. The title, the insights of the preface and the questions asked by Derrida have been an influential force behind this concept note. 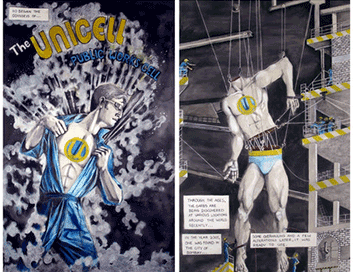 Why are we scared to imagine our future? by Bhumika Popli 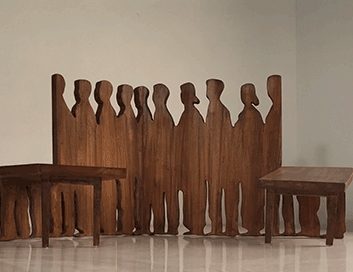 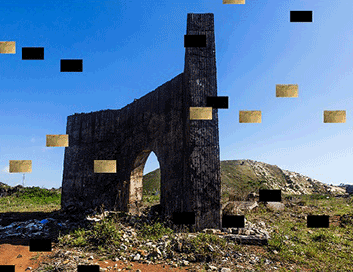 Back to the Future by Amrita Chakravarty