Can a door speak to the sky? Can barbwires speak to the land?
Can the demolished city ever speak to the complete plan?
Do the cartographies of our lives eventually exist as dust or as loom or as languages?
Do mirrors only like speaking to light?
Are maps, always, invincible squares? Or do they quiver sometimes?

Architect, Bernard Tschumi, explores the idea of architecture as a set of events, which we experience, imagine, create or live with. Tschumi’s formulation of ‘architecture as event’ can be extended to this exhibition that has been built together as a set of conversations, experiments and affects between artists, architects and artisans.

Parul Gupta engages in a jugalbandhi with the architect Madhav Raman. Their work is more a process than a finished art piece, emerging from their calibrations of light, mirrors and reflections as also of the voids created by each of these. Is their work of art an object or an event, or is it both?

Martand Khosla, on the other hand, has a conversation with his own architectural self, posing the issues of what the square accommodates, deletes or builds upon. In his architectural practice, Martand is also in constant conversation with the city, its scales, its squares and its people. Embedded in a strong sense of the material, he works with wood, brick dust and metal—the elements with a ubiquitous and ethereal presence in the built environment of our cities. Though Martand claims that his conversation is with himself as an architect, his work traverses the terrains of labour, working-class settlements, housing issues and the craftspeople he works with in his practice. It is the resonance of these conversations that speak to and flow back into his work. Is Martand’s work then a call for revolution, an event to change the world?

Ayesha Singh and Abhimanyu Dalal’s collaborative work creates a syntagmatic sequence of languages in an installation of kinetic lights. They have identified over a hundred languages spoken in India, which are contained in the installation of an inverted pyramid in the form of their written scripts. These include scripts that are no longer used, those that have been forgotten, and others that are widely recognized. The work generates a room of multilingual words, layering alphabet on alphabet from one or more planes of the pyramid onto the architecture that hosts the work, and formulates the potential of the formation of intentional and coincidental combinations. Arabic, Brahmi, Devanagari, Bodo, Khasi, English and many other scripts refract and generate new encounters of the spoken and the written.

Swirling sometimes gibberish, sometimes sensibilities, meanings and codes about the world around us. It begins to question, how does one work with the spoken when it has no written?

Shruti Mahajan has been in conversation with architect Ravindra Gundu Rao for about 20 years now. Starting from the ghats of the River Reva (Narmada) in Maheshwar, their warp and weft conversations have been crafted across different frames of thinking and materials. Shruti, being an artist with a deep interest in textiles, renders her frames of the river and the undulating steps of the ghats by reading shadows, light and life. She renders them in sketches, in textiles woven with deep and long friendships with the weavers of Maheshwar, who have walked the same spaces, lived with the same textures, walls and pathways as she had in the Holkar wadas of Maheshwar. Does the ripple and surge of the flowing river come to rest in stillness of the cloth, or does it continue in ongoing conversations?

These dialogues, between architects and artists, become events of dust, loom, babble, light and glass, holding somewhere coherence, somewhere form, wedded to confusions, affects and our existence, in all its fantastical beauty and grace. 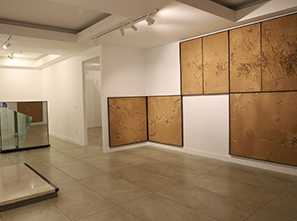 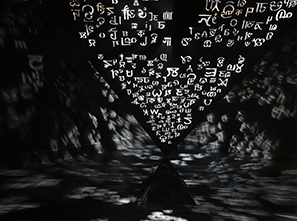 Architectural Digest | Delhi: Artists, architects and artisans come together for a show on ideas and scale | by Shaikh Ayaz