The varied dimensions of existence in contemporary times and the fractured, dislocated and divided states of being evoke the imaginative leaps of the artists in the present. The dystopic conditions at social and personal levels which create the turmoil and the turbulence of South Asia result in variegated forms of expression. As borders divide the landmass and interactions between one country and another become troubled, the core human dilemmas remain the same while diverse in their mainfestations. Incessant migrations, bloody skirmishes at the border, divisions between groups within each country, and the partitioned and divided selves of individuals themselves become the bonding factor in the entire subcontinent.

The further diminishing of the peripheral and the marginalised reaches a climactic pitch as countries split within themselves.
These point towards extraordinary territories that have to be mapped between religions, communities and sects to retain a semblance of humanity. Can there be a way out of these conundrums which entail a nexus of power and corruption and lead to endgames?
The works forefront the chasms that continue to widen for the ‘other’; the lives of those who belong to minority religions, the lower castes or the marginalised poor. The shadows and cesspools that trail their existence and create their nightmares form the undercurrents of this show.

. The Sri Lankan artist Anoli Perera’s annotated mask are a concealment, a veil, a denial to reveal but also embody a lurking sense of a threat or violence residing somewhere. Her rich enactment of history touches the very nerve centre of unfolding and reveals the issues and fractures of ordinary lives. Jagath Weerasinghe, on the other hand, creates with a raw immediacy the disaster zone of destruction itself and its anguished aftermath. While the context of the civil war informs the core of his engagement he relays stories of inhumanity and barbarity that repressive regimes are capable of at the universal level. The Bangladeshi artist Tayeba Begum Lipi’s cutting edge installations a forceful reminder of the continuous, daily violation of being, particularly the woman’s being, and the brittle edges of this predation. At the same time it creates the climate for a powerful voicing of this consistent transgression. Munem Wasif, also from Bangladesh, envisions mountainous territories which are a silent witness of these entrapped selves and encounter inescapable borders like nightmares. Across the continent, in Pakistan, we have Waseem Ahmed’s exquisitely embellished tea stained surfaces which seethe with undercurrents of violence and subterfuge. While traversing the domain of ordinary folk they point towards gross manipulation and aggression. Zoya Siddiquis’ diary of melancholia maps the journey of the migrant and inscribes his experience of dislocation. The migrant’s consistent longing for home, the unsettled territory of migration and the constant pain of dislocation form the anthropology of this project. The Nepali artist Karan Shrestha’s depiction of man- made disasters are the torrid narratives of fiction manipulated as truth which are designed to exercise power and control. His skilful deployment of life enactments reverse these conjured histories to create the theatre of the real.Youdhisthir Maharjan, also from Nepal, works with found materials and reclaimed text, to create a language that transcends their humble origin and takes a life of its own, inquiring the intersections of identity and anonymity. These exquisite cut-outs of texts are also palimpsests of new areas of conjunctions and conflations.

In Sumedh Rajendran’s wall installation of the fenced and barricaded individuals within steel bars, where like the entrails of the body, one can barely be distinguished from the other, the sense of entrapment remains. Despite their hard- edged surfaces, the regimented forms creates a cornucopia of memory and longing petrified in the frame. Gigi Scaria’s scaling work on the other hand is an exemplar of man-made disasters which while reversible are also indestructible. His works contain an inherent structure of displacement, dystopia and restlessness. In S.N.Sujith’s delicate watercolours, abysmal realities yet make a powerful impact. Their narratives of chaos of development and glaring differences of the plentiful and the disinherited peak and create nether zones which co-exist with brutal extremities. Nataraj Sharma’s expansive world view enfolds looming constructions which crowd the horizon leaving little room for escape or reprieve. In this midst of this, a diminutive workman sits savouring a sweet and revelling in its singular pleasure suggesting the solitary moment of relief. The expressive heads of Ravinder Reddy with their subversion of classical tradition and with their vivid colours and free standing nature are a memorial to the street and its sturdy, hard-working and courageous women. Elaborately coiffured, and sensuous the woman here, in her graceful poise carries a load on her head, for the nature of her work is arduous and she lives in penury. Her gaze transfixed in timeless suspension is a marker for the heroic installation. The intricately made papier mache installations of Veer Munshi are also an elegy to the senselessly deprived and degraded. Speaking of the insensate violence and destruction in his home state, Kashmir, he evokes its exquisite beauty in his works and the sadness of its condition today. The anthology of the departed, interwoven with anguish, and reverberating similar situations elsewhere echoes eloquently in his works. Suhasini Kejriwal’s recent works take place inside the contemporary Indian urban sphere, excavating the economies and individuals that comprise it. Since the past three years, Suhasini has been exploring two different neighborhoods of Mumbai and Kolkata.
Her embroidered photo composites of Chor Bazaar attempt to transform the daily and mundane in to images that are rich, theatrical and extraordinary. As as a collaborator and participant with Hamdasti in Chitpur’s community, she collaborated with a sign maker to create text combined with found objects. This series has attempted a poetic intervention in daily life while commemorating the literary heritage of the area.
The delving into indigenous traditions, which has reached masterly heights in Varunika Saraf’s works, creates a matrix for the sublime and the depths of existence. Her works replete with multiple interpretations is an assemblage of characters against richly woven backgrounds with intricate brushwork and surprising details. The Italian artist Nicola Strippoli Tarshito has collaborated with folk and tribal artists from different parts of India to create works of subliminal depth and beauty. In a suite of paintings recently, his works have resulted in intersections with water, human and animal life, vegetation and even gods which override man-made boundaries and seamlessly flow over the surface binding together religions, communities and sects. His collaborations with Gond painters of Madhya Pradesh, in this instance, creates a sinuous river Godavari which transcends boundaries and where the pathways, trees, animals and humans are interchangeable with each other as is the surface with the subterranean world where both surmise a parallel existence. Indeed the running water with its metamorphosis of aquatic and vegetal worlds, while crossing countries and continents also traverses the mythology and folklore of its people in continuous enrichment.

The continuum in the present of the Great Game enacted in colonial times divides and subdivides countries within themselves. Their visual evocations create the climate for endless stretches of imagination to the chasms that lie ahead and the road crossed thus far. Yet the art forms which map these out also allow for counterpoints and dissections creating a nexus with retrieval and re-emergence.

‘The Melting Pot’ by Pallavi Chattopadhyay 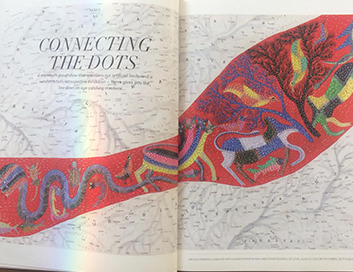 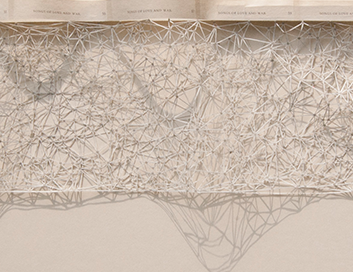 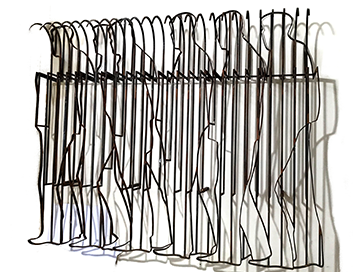 “The Edge”: Showcasing Art From The Subcontinent
https://www.mojarto.com/blogs/the-edge-showcasing-art-from-the-subcontinent

Fractures and Borders by Mila Samdub